How to build a house » Floor »

How to remove parquet flooring

How To Remove Parquet Flooring From Different Types Of Subfloor: Step By Step Guide and Tools & Accessories List.

In spite of all its durability, parquet flooring fades and wears out with the lapse of time, so sooner or later it will require total replacement. It’s not the easiest DIY task, however, you still can do this semi-complicated floor improving work by your own efforts. There are detailed instructions on how to remove parquet flooring from the subfloor.

The procedure of parquet removing depends significantly on the subfloor types. There are two main subfloor materials, plywood and concrete, and two separate instruction for each of them.

How to remove parquet flooring from plywood Removing parquet tiles from plywood is a meticulous work, especially if some strong adhesives were used to fasten the tiles to the subfloor. Start with putting your goggles and protective gloves on. After that, find at least a small gap between the wall and parquet. Put the pry bar accurately into the gap, push it gently and then lift the parquet tiles to a possible extent. You will see that tiles are stuck to the plywood in the places where adhesives were applied. Warm up the heat gun and aim it at the tile underside. Don’t put the gun to the tiles to a distance closer than 3 inches and never touch the adhesive with the gun tip. Wait until the adhesive becomes soft. You don’t have to move the gun, as the gun tip is constructed in a special way to spread the heat at all its sides. After the adhesive is soft enough, use tile scraping machine or a floor scraper of a proper size to lift the tiles and remove them. In case if some tiles or some small parquet pieces from the section still remain glued to the subfloor, apply the heat gun again and then scrape them. Repeat this procedure again and again until you remove all the sections, including small wooden pieces and stuck tiles and the floor becomes clear.

Note: heat gun is very hot, so be careful to the uttermost while using it and never touch its tip, even if you want to check if the gun is warmed up enough. After you finish using the gun, unplug it and give it enough time to cool before you put it away.

How to remove parquet flooring from concrete

It is pretty easy to remove the parquet from the concrete floor, especially comparing to plywood removal. To loosen the tile, you have to apply some force and high-frequency vibration. 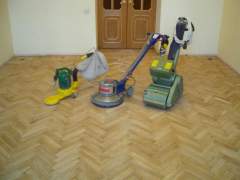 Put your dust mask, goggles, and protective gloves on. Find a little gap (i.e. joint) between two tiles. Accurately put the pry bar in this gap and push it until you reach the concrete. Pry one or two tiles off and take them away. Take vibrating machine, set it into the hole in parquet and lower machines blade so that it becomes even with the subfloor. If you use electric jackhammer, set its chisel in the same way. Switch the vibrating machine or electric hammer on and move it forward slowly. The vibration will loosen the tiles without causing damage to the concrete subfloor. Repeat this procedure for each section of the old parquet.

Finally, use tile scraping machine to remove all the parquet tiles. In case if the tiles can be separated from the subfloor easily, you can use a standard garden edger to peel them from the concrete.

Do not disregard advice regarding the wearing of protective goggles, dust mask and gloves. Safety first!

Before you start removing parquet tiles, don’t forget also to remove baseboards. To do that, use a pry bar. If you do not have a heat gun or electric hammer in your household, you can use the pry bar and floor scraper to pry each tile separately and separate it from the subfloor. However, it is not the best way to remove parquet flooring, as it takes really lots of time and efforts.

After you take the tiles off the floor, you will also have to remove the glue. Use hot water and soap or buy some special chemical solvent for glue removal. Do not use bleaches, as they cause damages to the subfloor, especially to concrete.

If you damaged the subfloor while removing parquet tiles, repair it before you put a new flooring on it.

Parquet tiles have to be disposed of properly. Old woods can be recycled. Don’t try to use the tiles as firewood. Manufacturers often cover parquet with special protective cover and it is extremely toxic when heated and burnt.

The easiest way how to install carpet on concrete

How to restore parquet flooring yourself

How to remove vinyl flooring correctly

How to install engineered hardwood flooring

The best flooring for dogs in the house

1 thought on “How to remove parquet flooring”