How long did it take to build the Twin Towers

How long did it take to build the Twin Towers – the short history of the famous skyscrapers.

Twin Towers – this is how New Yorkers called the two famous skyscrapers of the World Trade Center. Twin Towers were a national treasure and the proudly of the Americans.

The history of the project 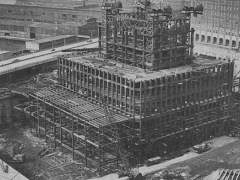 People often wonder – how long did it take to build the Twin Towers? It was a relatively fast project. The construction of the Twins Tower was launched in the 60s, and the author of the project, Minoru Yamasaki, believed it would awaken the optimism and faith in the future of their country in people of America. Authorities decided to develop a large-scale project that would become the pride of millions of the Americans.

In 1962 Minoru Yamasaki embodied the future World Trade Center inside of his mind and a little later, in 1964, the first drawings of skyscrapers in the scale of 1:130 life-size were created. The construction of the “giants” began two years later. The first problems appeared in the beginning of the construction – there was no pasture stone at the site. Before the Twins Towers, all of New York skyscrapers were erected on a stone base. Builders found artificial soil mixed with pebbles and sand. This meant additional difficulties, additional costs and additional concrete.

Also, there were problems with the underground railroad and underwater path to New York to New Jersey. If thousands of Americans faced the closed roads due to the construction of this kind, the economic problems would quickly appear. So the team had to work fast. 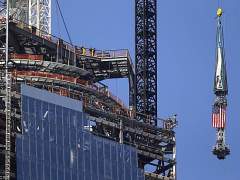 The two skyscrapers were planned of a great height, they had to become the highest skyscrapers in the United States. Engineers faced the challenge to build such a building height, so it was decided to apply a progressive structural model. It was a rigid “hollow tube” of closely spaced columns, floors with farms which extend to the central part. The outer surface consisted of four walls. Interfloor floors were made of special corrugated steel and hard concrete slabs. The steel beams were erected for mounting internal elevators of the future building.

The Twins Towers became the first high-rise buildings erected without masonry, so the participants began to worry that the standard shafts will not be able to withstand the intense air pressure generated by the lifts. So the engineers developed a solution – the so-called dry-wall system which was mounted in a sturdy steel base. In case you wonder how many floors in the Twin Towers buildings – each of them had 110. The North Tower was completed in 1971, and two years later the South Tower was finished. The official opening of the World Trade Center is April 4, 1973. Their height was 1476 feet. The foundations of the skyscrapers were plunged into the ground for a depth of about 75 feet. For frames it was spent 200 thousand tons of rolled steel. Cables for the electrical networks could stretch for 3,000 miles. The total capacity of electricity networks was about 80,000 kilowatts.

All these figures tell only one thing – the planned project was of an unprecedented scale which would become the pride of all Americans. It was a dream came true. The facades were made in the form of frames made of steel, modular aluminum sections were mounted on them. This design was able to withstand very strong winds at high altitude.

The death of the twins The design was strong enough to withstand a collision with an aircraft – on 9/11 the Twin Towers were killed principally by fire. Tons of gasoline that were in the tanks of the aircrafts caused the fire the skyscrapers, unfortunately, were not ready for.

A place where the Twin Towers stood, is now turned into National 9/11 Memorial Museum. The killed skyscrapers should be symbolized by the two swimming pools repeating their circuits. Between them a small museum building is being built.

How Long Did It Take to Build the Eiffel Tower

Hazards of working in a confined space